CHMP’s ENVISION HEALTH: FILM & NEW MEDIA SERIES links filmmaking to social change by leveraging the power of media to engage a diverse group of people and communities in NYC in crucial conversations that can advance the health of the public and healthy public policies.

NEXT EVENT!!  SEMPER FI: ALWAYS FAITHFUL a film by Rachel Libert has been postponed until early fall. Stay tuned for details!

On Tuesday, March 20 we co-hosted a special screening of THE APPLE PUSHERS, a film by Mary Mazzio. The event was organized by Hunter College President Jennifer J. Raab and the Laurie M. Tisch Illumination Fund. City Council Member Melissa Mark-Viverito (District 8) was present for a lively Q&A about food policy issues in New York City.

On February 23, 2012 we screened Nancy Schwartzman’s THE LINE, a film and media campaign to end sexual violence. Nancy presented the film and her amazing outreach campaign which includes community screenings, a successful blog, a strong presence on social media sites and the development of an exciting iphone app. Her app, called “Circle Of 6” won the prestigious White House award “Apps Against Abuse.” It’s an amazing design and will be available soon. After Nancy’s presentation we had a great discussion about sexual violence and the role of new media in the fight to end it. See photos from event here.

On Thursday Nov 17 we screened THE WAITING ROOM followed by a fascinating discussion about health reform and the role of media with the film’s director Pete Nicks and other panelists Tonya Walker, MD, Sheena James, RN and Jamilah King journalist and editor at Colorlines. The conversation was moderated by CHMP Senior Fellow Hannah Rosenzweig. The Waiting Room is a film and storytelling project that documents America’s changing health care landscape through the eyes of patients and caregivers at Alameda County Medical Center in Oakland, CA. Stay tuned for the film’s PBS broadcast and release in 2012. View our event photos HERE.

Our screening of ALL OF US by Emily Abt at the CUNY School of Public Health at Hunter College was moving and thought-provoking for all who attended. At the end of the screening we had two surprise panelists – Dr. Mehret Mandefro and Chevelle Wilson (pictured on the left) – both featured in the documentary. Dr. Mandefro gave us an update on her work as a physician, teacher, researcher and White House Fellow. It was meaningful for our audience to hear how she’s continued her work around HIV and black women, investigating the social factors that put women at risk for disease. We loved hearing Chevelle’s stories about her work as a health educator and an update on her son Robert Jr. She’s truly an inspirational woman! Our panelists Emily Abt, Juhie Bhatia and Valerie Leon lead an important discussion about topics including Leon’s domestic violence prevention work in East Harlem, Bhatia’s perspective on reporting on women’s health issues, particularly HIV and abuse, and Emily shared details on the filmmaking and editing process. The event’s moderator was Dr. Jessie Daniels, CHMP Senior Fellow and Associate Professor at CUNY’s School of Public Health. View our event PHOTOS here.

NEWS: Our Fall 2011 Series begins on October 17, 2011 with a screening of ALL OF US by Emily Abt at Hunter’s East Harlem Campus. Stay tuned for details on this screening and others!

MADE IN INDIA, a documentary by Rebecca Haimowitz and Vaishali Sinha

On February 23, 2011 we screened MADE IN INDIA at the lovely ROOSEVELT HOUSE PUBLIC POLICY INSTITUTE at Hunter College. It was a completely full event, thanks to all our guests. MADE IN INDIA is a fascinating film about surrogacy and reproductive tourism in India. After the screening we had a lively conversation with our panelists and audience. Our panel included filmmakers Vaishali Sinha and Rebecca Haimowitz, Dr. Carole Vance, Professor of Public Health at Columbia’s Mailman School of Public Health and Daisy Deomampo, a CUNY graduate student. Check out our FLICKR page for photos of the event. 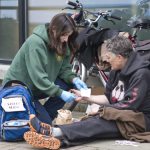 BEVEL UP: Drugs, Users, and Outreach Nursing, a film by Nettie Wild

On Tuesday October 26, 2010 and Thursday October 28, 2010 we held two events with Vancouver Street Nurses, Fiona Gold and Jaunita Maginley.  Both evenings began with a screening of their documentary: Bevel Up: Drugs, Users, and Outreach Nursing and was followed by a discussion with Ms. Gold and Ms. Maginley.  Below are some interesting questions and comments raised during the conversation after screenings.

The October 26th Event was held at Hunter College and moderated by Dr. Jessie Daniels (CHMP Senior Fellow and Associate Professor of Urban Public Health at Hunter College), and the October 28th event was at New York Academy of Medicine’s Ninth International Conference on Urban Health.

With the complexity of care involved with Street Nursing, how has the program been organized to handle this?

From Ms. Gold and Ms. Maginley:  Key to keep in mind is the saying that came from the HIV/AIDS movement, “Don’t make plans about us, without us” (Ms. Maginley).   Listening to the needs of the people being served is the most important factor in providing good care.  This allows the program to better connect people to housing, clinics, detoxification programs and mental health services.

What have you seen come out of widespread distribution of the film?

From Ms. Gold and Ms. Maginley: The film has been even more than just an instructional tool, but also a way to create dialogue about difficult questions regarding needs of an area where those who are watching it are.  Masha Golovanevskaya from the Open Society Foundations New York was present, and was asked to share her experiences of working with nurses and public health organizations in Russia and the Ukraine.   She said “Bevel Up” has been included as part of a harm reduction curriculum in many harm reduction programs throughout the Ukraine and Russia.  Not only has it helped to promote effective harm reduction strategies, but it has also helped empower nurses to help those suffering from addiction.